Lift and Slide door systems, which are popular options for larger expanses of glass, offer several advantages over conventional sliding doors or multi-slide systems, including unencumbered views; smoother opening and closing; increased energy savings due to optimized door sealing; and space savings over traditional swing doors or bi-fold systems. The smooth sliding panels, which feature a wood interior and aluminum clad exterior, can stack on one or both sides of an opening. 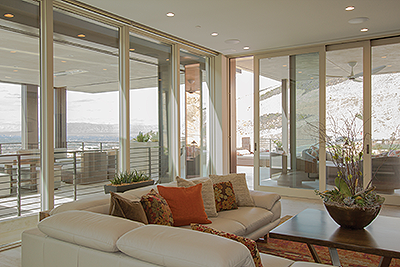 Sierra Pacific’s new line offers an advanced weeping system that is ideal for areas with rainfall exposure. This provides a very low profile leg on the interior sill to allow for a more modern design. Additionally, a full KD frame drops into a built-up sill, which enables an easier install and eliminates potential operational issues. “This feature, alone, was deemed a ‘game changer,’ because of how much easier it is to install our system over competitive systems,” said Vice President of Business Development and Customer Service Bob Taylor.

Other engineering features built into the Sierra Pacific lift and slide system include:

From its inception, extensive beta installs and test marketing were conducted on the new line. “Our engineering team was firmly committed to creating a system that was not just on par with other systems, but one that was truly superior. It’s safe to say that we have succeeded,” Taylor said.

The new system was unveiled as part of the 2016 New American Home, presented by the NAHB Leading Suppliers Council, showcasing the latest in innovative products for the future of home building. “After seeing the product in action, the Sierra Pacific lift and slide doors that lined this year’s stunning home were put on many builders ‘must-have’ lists for their performance, elegance, and ease of install,” Taylor said. The new system will also be on display in the Sierra Pacific Windows booth at the International Builders’ Show in January in Orlando.

Sierra Pacific Industries is a third-generation, family-owned forest products company based in Anderson, California. The company owns and manages over 2 million acres of timberland in California and Washington, and is one of the largest lumber companies and largest manufacturer of millwork in the United States. Sierra Pacific Industries is committed to managing its lands in a responsible and sustainable manner to protect the environment while providing quality wood products and renewable power for consumers. The company’s forests are certified under the Sustainable Forestry Initiative®. Sierra Pacific Industries utilizes nearly 100 percent of every piece of wood brought to its 18 mills and seven biomass-fueled cogeneration power plants.

Where Can I See Windows & Doors In Person?

Find a Showroom
Request a Brochure
Back to Top